From UNamur InfoSec
Jump to navigation Jump to search

We have constructed a Wifi sensor network with ESP8266 Huzzah micro-controllers with different type of sensors such as: Temperature, movement, humidity, luminosity, vibration sensors. We have also developed the access control module to be used to control different devices (sensors) for different testing scenarios. The scenarios are connected to smart home system environment, which is built based on our defined smart home system architecture shown below. It is the functional smart home architecture: 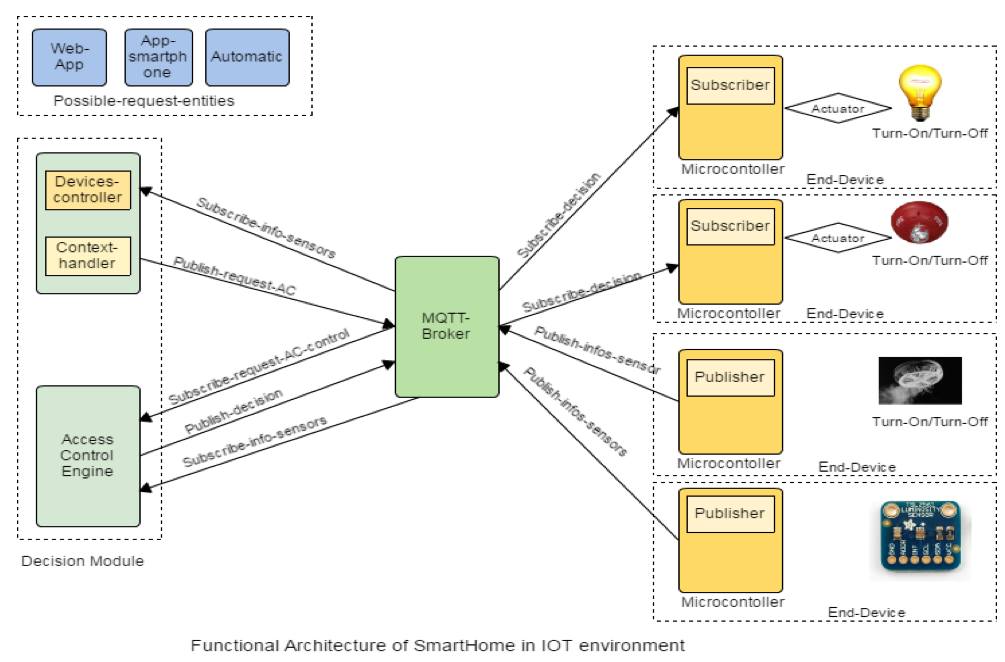 1. Device controller is responsible for controlling all the sensors and actuators installed in the network. For example, how the devices join and be registered in the network. Context-handler is responsible for forming/constructing the request query for access control engine. The structure of query depends on the access control engine used and language supported by the engine. For example, XACML engine (https://en.wikipedia.org/wiki/XACML) uses XML language to express the access query and access control policies.

2. Access controller engine is responsible for validating access control policies based on the request from device controller. It is worth noting that in our proposed architecture, multiple access control engine can be used in a network.

3. MQTT Broker is a MQTT server allowing devices (other system components) to publish or subscribe for information.

4. End-Devices are the sensors or actuators installed in the network. Those devices can act as subscriber or publisher.

Based on the proposed system architecture, we implemented a complete and functional smart home system with different scenarios required in day-to-day home activities and security/safety. The goal of implementation is to evaluate the system performance and also the effectiveness of the devices used (micro-controllers and sensors). The tests were done for both Local Area Network and Wide Area Network (Internet).

We implemented five different scenarios for smart home environment. They are:

a. Turn on lamp when it is dark and the home owner is at home

b. Turn on alarm when temperature raised above 25 degree C

c. Turn on alarm when movement sensor detects movement and the alarm message is also sent to home owner.

d. Turn-on and off lamp from web-application.

e. Alarm is turned on when strong vibration is detected

List of the complete scenarios can be found in https://doc.info.fundp.ac.be/mediawiki/index.php/File:List_of_Smart_Home_Scenarios.pdf

We have performed all the scenarios listed in Section I. Since some scenarios require real-time data communication, the response time is out prime investigated parameter.